What Does Yin Yang Mean?

Yin Yang - The Elements of the Symbol
The Meaning of Yin Yang Symbol
Yin Yang Accessories
Yin Yang and Religion – To Wear or Not To Wear?

The Yin Yang sign is one of the oldest symbols, dating back to ancient China. Yin and Yang signify that the world is ruled by a cosmic duality, a combination of two contrasting and complementary principles or cosmic energies that may be seen in nature. ☯️

While few individuals know the sign and its meaning, it has become a famous jewellery symbol, appearing in stunning pendants and charms.

Yin Yang jewellery was in great popularity in the 1990s. Stars like designer Alexa Chung and super blogger Andrea Vandall wearing it has reintroduced the symbol back into the limelight.

So, what is this sign all about? And should you put it on? This article addresses all of your questions concerning the ancient Yin Yang symbol.

Yin Yang - The Elements of the Symbol To create the Yin Yang sign, also known as the Tai Chi symbol, split a circle into two parts by a curved line. The black half of the circle represents the Yin side, while the white half represents the Yang side. Each colour has a dot towards the middle of the other's half.

As a result, the two halves are intertwined over a spiral-like curve that divides the entire into semicircles. The little dots convey the concept that both sides bear the seed of the other. ⚪️⚫️

​​The white dot in the black area and the black dot in the white area represents coexistence and the coming together of contrasts to make a whole. The wavy line represents that there are no ultimate separations between the two opposites. As a result, the Yin Yang sign means both sides: duality, contradiction, unity in variety, transformation, and harmony.

The Meaning of Yin Yang Symbol The Yin Yang symbol's concept is both simple and complicated. On the surface, the sign reflects opposing ideas, such as good and evil or masculine and female, which is partially true. But there's much more to this basic design than meets the eye.

Let's check out this idea. The dark and light, female and male, cold and hot, and so on are examples of Yin and yang components; nevertheless, Yin and Yang are not fixed or mutually incompatible concepts. While the world comprises many distinct and often competing forces, they may coexist and even complement one another. Nature's opposing forces can even rely on one another to live. The exchange and interplay of the two components is the essence of yin-yang. The transition between day and night is an excellent example: there can be no shadow without light. 🌆

The Yin Yang harmony is critical; when Yin is strong, Yang is weak, and vice versa. However, in some situations, Yin and Yang can interact; therefore, they are seldom Yin and Yang alone. In other words, Yin elements can contain some Yang components, while Yang can have some Yin components. This Yin Yang equilibrium is considered to exist in everything.

We desire heat because there is cold. Because there is movement, we recognize stillness. A perfect balance necessitates the presence of both parts. And when one is out of balance, calamity might ensue. This applies to everything, from nature to health to relationships. There are always conflicting forces at work, yet they are interwoven.

The yin yang is a universal symbol that may be used in a wide range of jewellery types and designs. The Yin Yang sign is famous in necklaces because of its perfect harmony and excellent ratios. When worn around your neck, the emblem is both eye-catching and fashionable. ✨

These Rivendell Yin and Yang necklaces are the perfect accessories for providing peace and calm in these times of uncertainty and turmoil.

You can wear these complementary Yin and Yang necklaces together with a special friend, partner or family member as a daily reminder of your bond. It's a perfect gift to signify a relationship of harmonious duality. ﻿Yin Yang Dreamcatchers are especially recommended for those seeking the ultimate balance and harmony of all elements in the cosmos. It can, indeed, be utilised as a visualisation decor.

Dreamcatchers were traditionally practiced as charms to keep people from having nightmares and terrible dreams. These talismans  are used to trap happy dreams and slowly slip them down through the fluffy feathers to the sleeper below. 😴

Hanging a Yin Yang Dreamcatcher in your house will bring you peace and balance your chakras. Whether for interior or exterior design, you may display it on your doorway, in your living room, or in your bedroom.

Yin Yang and Religion – To Wear or Not To Wear?

The Yin Yang symbolism is based on Taoism, also known as Daoism, and is employed in Confucianism. However, it is not considered a religious symbol.

Unlike the cross for Christians or the crescent moon for Muslims, the Yin Yang symbol is more global and not directly associated with any religion. Instead, it's a principle that applies to everyone. 👫🏼

Yin Yang is a profound symbol that anybody may wear and looks great in jewellery. Many people discover that the symbolism of duality may be integrated into their religious ideas. However, this is entirely up to you.

Several Christians may believe that the sign is not divine and does not bring one closer to Christian principles. Christians may also claim that because God does not have any darkness, the yin yang symbol is confusing.

If you can relate to the symbol, you can just wear it. However, if you have any doubts, talk to a faith leader of your religion and seek their advice.

I love all of the bracelets, looks very nice on me. 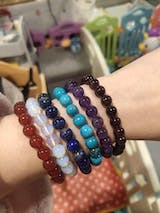 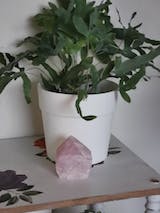 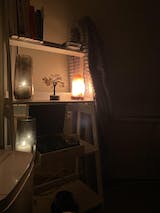 Beautifully made and so lovely to look at. Love wearing this ❤️💯 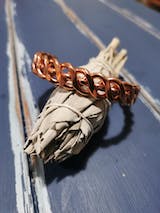 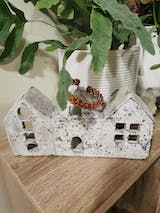 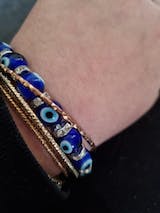